Following the discussion on the popular non-inverting opamp configuration in the previous post, let us look at another option for a gainclone: the inverting configuration. It is very common for opamps in general, but it is used much less than the non-inverting for audio power amplifiers. 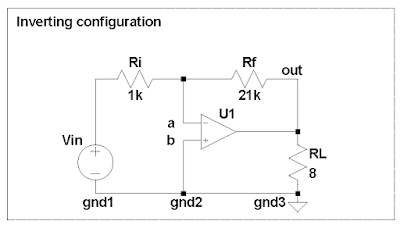 In this configuration, the opamp U1 (such as an LM3886) drives its output so as to minimize the voltage between points a and b. Point b is grounded, so point a has the ground potential (is a "virtual ground") as long as the opamp can keep it there by keeping the equality:


Vin / Ri = - V(out) / Rf
Since both inputs of the opamp are at the ground potential, there are no non-linear currents charging or discharging its input capacitance. This resolves the second issue of the non-inverting configuration described in my previous post. Unfortunately, the "one ground" issue is still present; gnd1, gnd2 and gnd3 still need to be one and the same point.
Two inconveniences are introduced by the non-inverting configuration, although they do not directly degrade the amplifier's performance. First, the input impedance of the inverting configuration is equal to the value of Ri and is generally low; a typical value is in single kiloohms. This may be too low for the preamp or a volume control. Second, the source impedance adds to Ri and reduces the amplifier's gain. The catch is that the LM3886 is only stable if the gain is 10 or more. If the source impedance is high enough, or if the input is left disconnected, the gain will drop below 10, and the opamp will oscillate.
These two inconveniences can be addressed together by placing a buffer in front of the power amplifier: The buffer shown here is another opamp, but it can also be built with discrete components. Since the power amplifier inverts, another inverting stage may be added to keep the absolute phase of the signal, such as in this design by Mauro Penasa: What is HASL with lead and why you may prefer it over ENIG
February 15, 2020

Where to connect that black loudspeaker wire
September 09, 2019